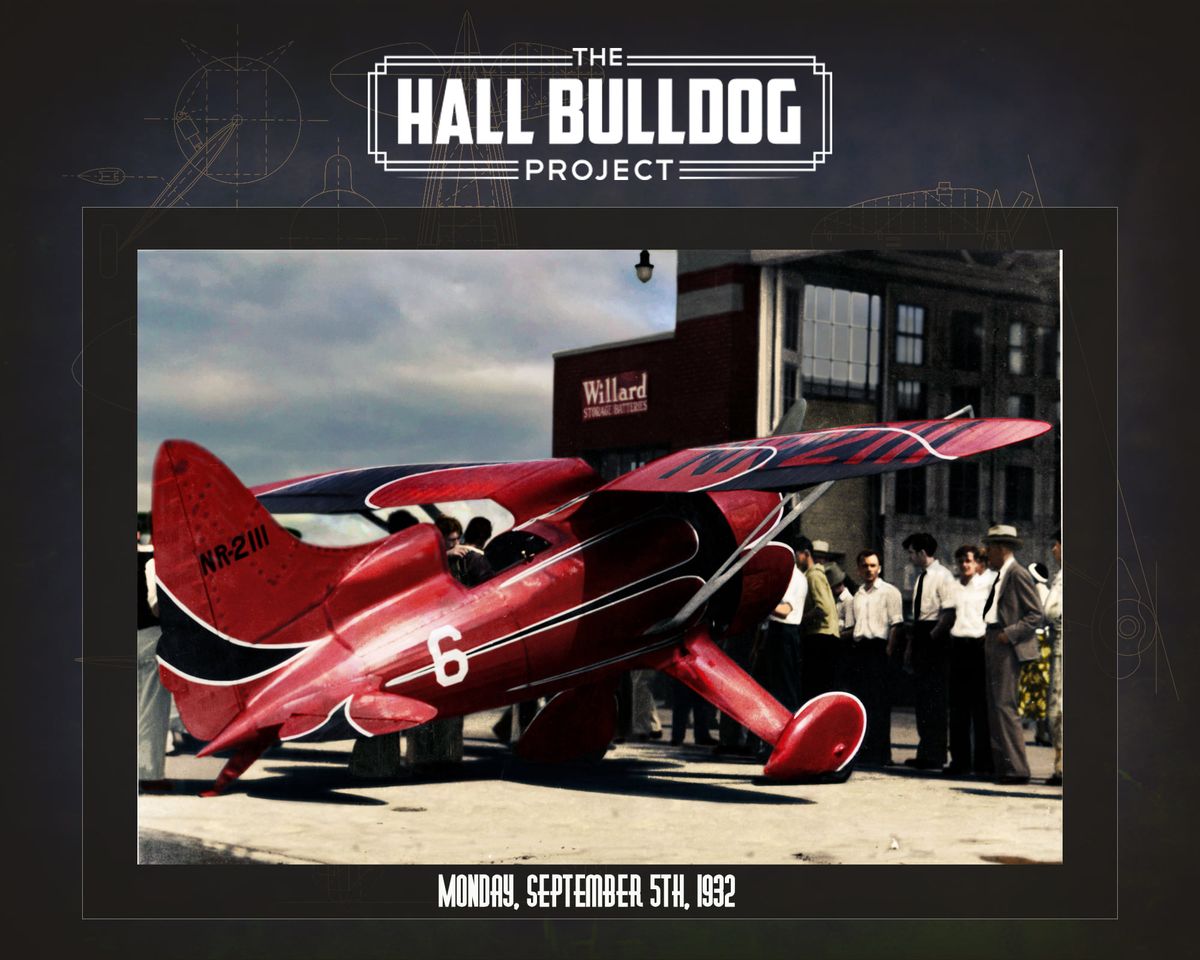 In the morning, Bob Hall and the Springfield Aircraft Co. team fire up the Bulldog for another official timed run at the landplane world speed record. Hall flies low and fast just in front of the filling grandstands. The plane’s noise and speed gives those already in attendance quite a shock. To untrained eyes in the stands, the Bulldog looks incredibly fast. In reality, the run isn’t remotely close to the speed needed to surpass the #11 Gee Bee R1. Bob makes 4 passes over the course averaging 243.717 mph. The modifications to the exhaust system have reduced the Bulldog’s speed. There is not enough time to return the ship to its original set up before the afternoon’s Thompson Trophy race.

Bob Hall has drawn the top position in the Thompson staggered start. The eight competitors tow their aircraft to a spot at the northern end of the bleachers. Bob Hall in the Bulldog, Jimmy Doolittle in the R1, Lee Gehlbach in the R2, three Wedell-Williams ships flown by Jimmy Haizlip, Roscoe Turner, and J.R. Wedell, Ray Moore in the San Francisco 1, and finally Bill Ong closed out the group in Howard’s IKE. The field remains covered in deep mud filled ruts and rainwater from the previous day. During engine start-ups, the Gee Bee R1 backfires, momentarily igniting a fire on the aircraft. Some quick actions from the ground crew prevent any damage.

Based on the pre-determined starting order, Bob is the first to get rolling. Hall pushed up the throttle and kicks the rudder pedals back and forth to straighten up the plane. The field’scondition slows his takeoff. The Bulldog bounces a few times before finally becoming airborne as it passes between the home pylon and parachute circle. Gaining altitude, Bob put the plane into a slight left bank and heads for the first pylon.

Not far behind, Jimmy Doolittle begins rolling in the Gee Bee R1. The white and red Gee Bee swiftly closes the gap and passes the Bulldog as the two planes clear the third pylon. As Hall nears the completion of his first lap, he throws the plane into a steep knife-edge turn, rounding the course marker. He would never formally comment on this action, but it is suspected by many that Hall did this to thumb his nose at Russ Thaw who was watching from the ground.

As the field began their second lap, Doolittle opens the gap between himself and Hall, who was then in second place. Ray Moore in the “San Francisco 1” is forced to drop out with engine trouble. Doolittle continues to extend his lead until he laps Howard’s IKE. Meanwhile, Hall begins to experience issues with his aircraft; the Bulldog is not responding to his increased throttle inputs. Hall gradually drifts back in the pack as he is passed by the three Wedell-Williams racers and the Gee Bee R2.

By the fifth lap, Doolittle is again coming up on Hall, who is still in sixth place. He easily laps the red and black plane. Before the end of his final lap, Doolittle passes the entire field at least once. Doolittle finishes first with an average speed of 252.7 mph, a new closed-course speed record. Bob Hall and the Bulldog remained in 6th, finishing with an average speed of 215.57 mph.

The reason for the Bulldog’s poor performance is never fully understood. Hall had suggests that the Hamilton Standard controllable pitch prop had limited the performance of the Wasp engine. Perhaps the numerous modifications to the tail surfaces in the weeks leading up to the race negatively changed the aircraft. Or maybe there just wasn’t enough time in the extremely tight schedule to truly test and optimize the plane for competition. In an interview near the end of his life, Bob Hall notes that the speed lost by switching out the original exhaust system was the difference between finishing “in the money,” vs just outside of it. The few miles per hour he would have gained by leaving the exhaust system as he originally designed it, could have given him a reasonable chance to defeat the Gee Bee R2.